I was back to Bakersfield California for a few days of paying work and some family time! In an attempt to manage my belt, I cannot and will not take every evening meal at the Lengthwise brewery or one of the two Lengthwise Pubs! As much as I want to continue my education into local craft beers I am restricting my intake.

I love hoppy IPA’s and just had to try the Lengthwise offering ,Double Centennial Ale. From the Lengthwise web page.(“This double IPA is generously kettle hopped and dry hopped with Australian grown Galaxy hops.  Galaxy hops add gentle citrus and passion fruit aromas and tastes.  Unlike most DIPAs this beer finishes a little dryer which helps showcase the hop flavor.”)

Yummy and hoppy but with a crisp clean aftertaste! I took notes and this maybe the model fo my next “all grain” batch for an IPA. I haven’t brewed with Galaxy hops but I just may have to give it a shot!

Yummy…..around 9% ABV so drinkers must use care, caution and portion control!

The fridge is now well stocked with two, 6 Liter mini-kegs. I have been using these mini kegs by Tap-A-Draft for several years now. It is so cool to go to the fridge and draw a draught(draft) beer in the comfort of your home. The challenge is to behave and be frugal with my special brews. On top of that, just a minor little thing…..these beers are about double the calories of a Coors Light. I use the optical trick of using 12 ounce pilsner glasses instead of my pint or Imperial pint glasses to fool my myself….apparently I am easily fooled!.

One tap is the Raspberry Wheat Ale brewed with my home brewing buddy Mike H. He uses the soda fountain type kegs commonly known as “corny” kegs. They are typically 5 gallon capacity, but he also has a couple of 2.5 gallon kegs….so, we split the batch. He filled his 2.5 gallon keg and I split the remainder of the 5 gallon batch into two 6 Liter mini’s. It is very much like an Abita Purple Haze for those of you that know of the beer.

The other is my first all-grain beer. All grain is defined as; “Homebrewing method that does not use any extracts. All grain homebrewers use malted grains in a mash to produce sugars for fermentation. All grain brewing is more difficult but it affords the brewer greater freedom and flexiblilty over the final product.”

The all grain batch is a Naked Golden Blonde, not because of my lecherous nature -it is due to the use of Naked Golden Oats from the UK as a portion of the grain bill. I will have to admit that she, I mean the beer, turned out to be very blonde! In fact, I just finished mowing the lawn and I deserve a Naked Golden Blonde………Ale! 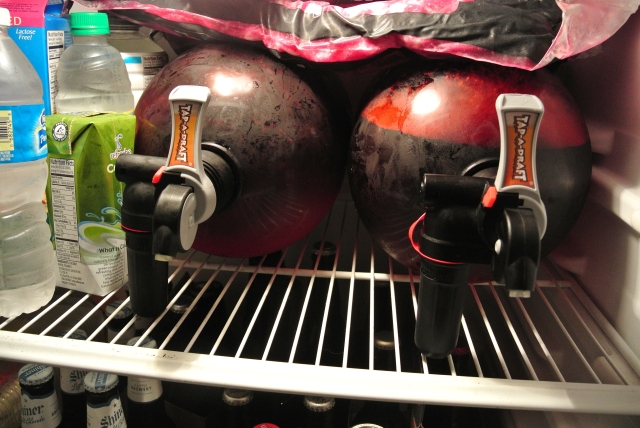 The left is the Raspberry Wheat Ale and the right is the Naked Golden Blonde Ale. 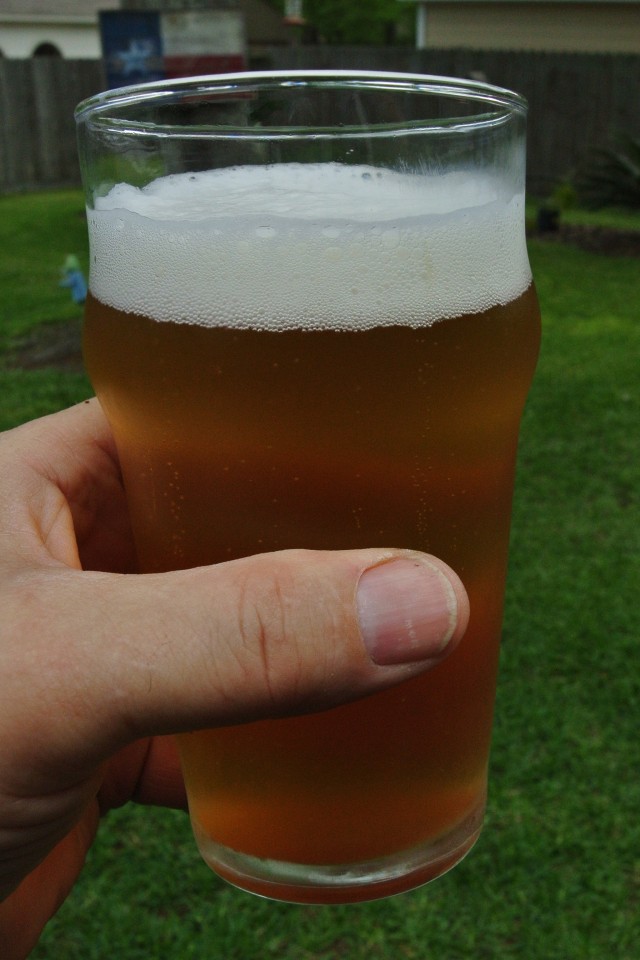 Ah, A Naked Golden Blonde Ale with a freshly mown lawn in the background!