This is a Belgian Wit beer and made for my wife!!! It is very similar to a Blue Moon made by one of those “evil giant conglomerate brewing companies”. A key difference with this batch is the absence of coriander. It does contain the zest of a grapefruit, locally grown, zest of lemon off of my tree and the zest of a store bought blood orange. Preliminary tastings while racking and checking the gravity have been very nice. Gotta wait 3-4 weeks to let it condition properly.

The all grain beer recipe; 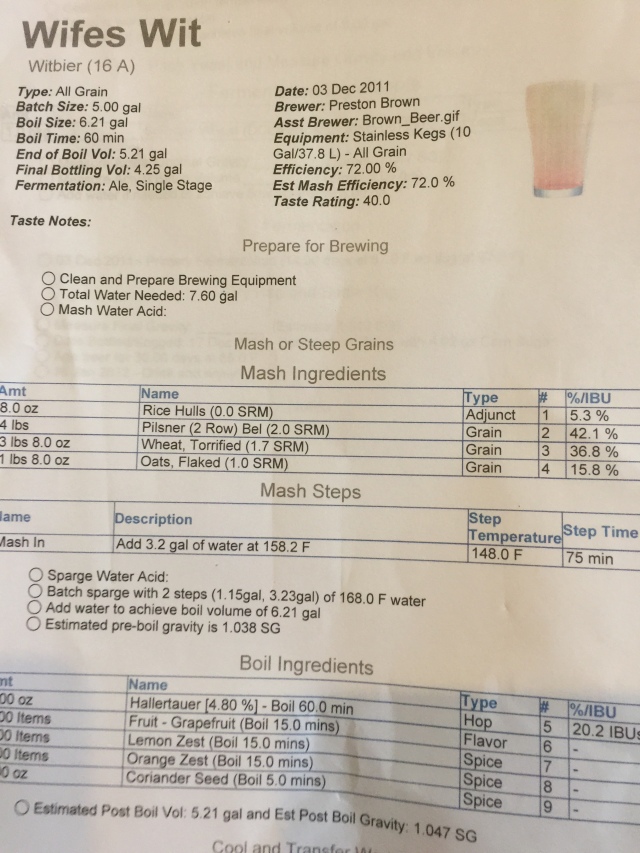 This batch will be bottled – I wanted to use my 6 liter Tap-a-Draft small kegs but they are out of business and I need parts! Dang! I added 3.6 ounces of corn sugar to carbonate at around 2.4 volumes. Bottling is tedious and sometimes a little messy, so, I will most likely mop the floor again. I do hope it passes inspection!

Important decision before I start bottling – what should I drink to aid in the bottling process, my SMaSH IPA? A stout? No, too heavy. And the winner is……..

Yum…….. just one – Double IPA’s can sneak up on an unwitting and inexperienced beer drinker. I definitely have the experience part down several times over. Unwitting, well, I know the issue but sometimes that third or fourth IPA can cloud a persons judgement. The bottles have been sanitized and placed in a handy drying rack.

I hope I counted correctly! Yes Haw – I had two bottles left over and about 6 ounces for a little taster. It definitely passes muster. I don’t always label my bottles, I distinguish them by the color or type of cap. I asked Kathy which one she would prefer but she deferred to me. My choice! Gotta love Ben Franklin!

Waste not want not! I use recycled bottles, many consumed by me but I do get a little help from my friends. My supply is getting a bit depleted so I will need to gather up some before the next batch. I even recycle the 6 pack carriers. A couple of my favorites represented here.

Bell’s Two Hearted Ale is awesome but their Hopslam is amazing!

I was rushing and trying to get too much done before “Leaving on a Jet Plane”……. Peter, Paul and Mary was playing that song in my headphones just as that song popped up. I need to make a folk singer playlist…….. I know, this doesn’t have anything to do with beer brewing or consuming, but that is how brain works, or according to some, doesn’t work! The rush also translated into riling up my bees during inspection and adding a few supers earlier that afternoon. I took a couple of stings through the gloves and at the next stop I took two in my left bicep……looks awesome! Makes a nice peak when I flex. I mopped half the kitchen and left a few 5 gallon buckets drying on the counter. I hope my wife knows where I keep them!

Get back on track now! Next, I think I will brew a double IPA or maybe a Pliny the Elder clone??? Maybe if I score some really good fresh hops a Hopslam kind of creation that is heavily dry hopped. Stay tuned I will get around to it in April …….. possibly.

Finishing up a few days in Teddy Roosevelt National Park. There is a nice little brewery in Watford City called Stonehollow. Awesome beers!