Primarily a catch all for any beer less than a Dark Ale in color, ranging from amber (duh) to deep red hues. This style of beer tends to focus on the malts, but hop character can range from low to high. Expect a balanced beer, with toasted malt characters and a light fruitiness in most examples. The range can run from a basic ale, to American brewers who brew faux-Oktoberfest style beers that are actually ales instead of lagers.

I have a copy of “BeerSmith 2” loaded on my computer, FYI, I love the program!  I did a search of the recipes in the BeerSmith cloud and found an American Amber Ale that caught my eye…..probably for all the wrong reasons….Uncle Mickey is the brewer’s name. I do need to give him credit for the recipe because, I brewed it step by step, just as he submitted it. I chose to honor his “naming convention” for his beer but, in order to be a little less crass, I translated it into German – “Zucker Zitzen” – Therefore it will be labled “ZZ Amber Ale”.

The beer is in the bottle and now capped with a dark pinkish red cap. I use cap colors to differentiate my beers until they receive a label. The 6 gallon batch filled 54 standard size bottles…12 ounces. I was almost a week late getting it into the bottles but, the sample I pulled for the gravity check was nice, definitely malt forward and a hint of sweetness. I think it will be nice. It is not heavily hopped, 1 ounce of Summit at 60 minutes, 1 ounce of Amarillo Gold at 10 minutes and 1 ounce of Cascade at flame out and I let it sit for about 15 minutes before beginning to chill the wort.  I have 21 days to let it condition and age before the crawfish boil. With my lack of patience, I will most likely have sampled a couple just to be safe before the party. FYI – I worked up a sweat bottling so I enjoyed a bottle of my SMaSH IPA (American Flag cap), while resting before the cleanup began. I think I am down to about a dozen of that batch left……I better be a little stingy and hide a few! 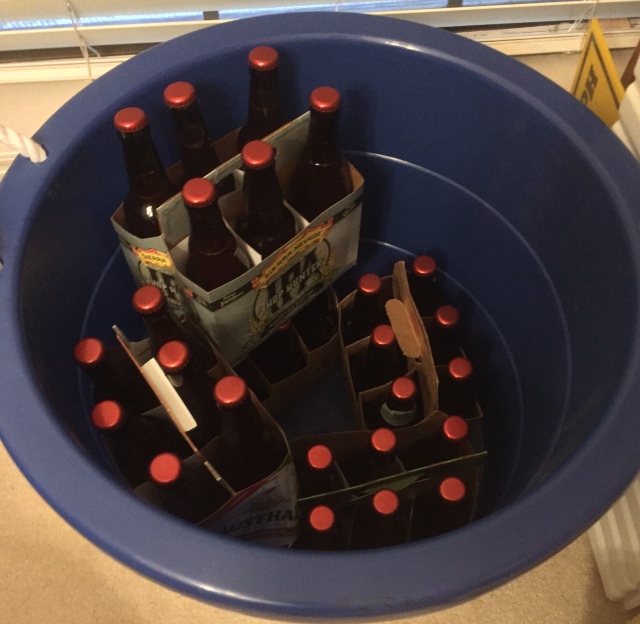 Five six packs of random shaped bottles, all 12 ounce bottles, but recycled from my broad and diverse drinking habits. ( a six-pack of stubby bottles are hiding below the Sierra Nevada six-pack) 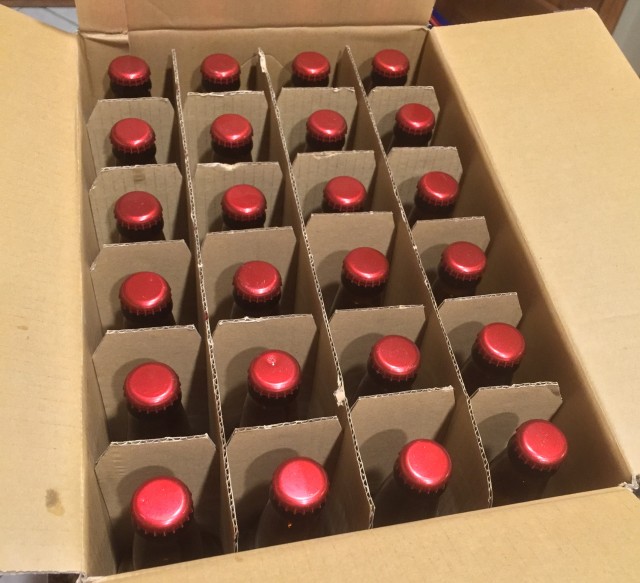 So many choices and so little time!

I made a bee run this morning, feed a few and finish setting boxes for the 6 NUC’s I will pick up on Thursday. Now it’s time for a brew. Next last stop on my route; 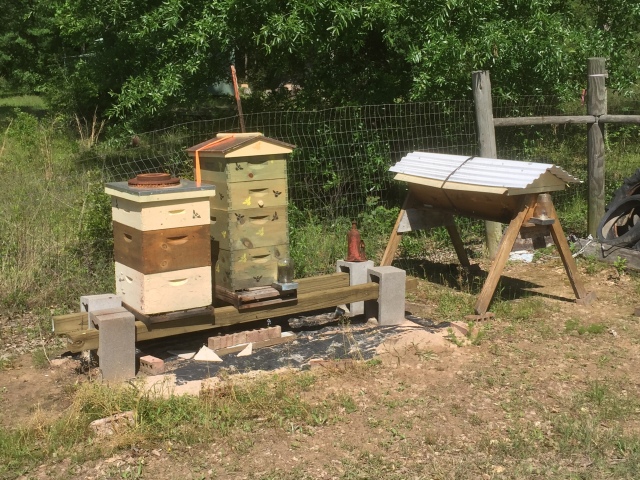 I added a third Langstroth box at the end of the stand. It is now ready to receive it’s NUC on Thursday.

Now, enjoying my SMaSH IPA! So, any guesses where I might be? City, county, state or state of mind? Search the photo for a hint!

Another beer note, my Amber ale should be ready to bottle this weekend. Yee Haw, at the Crawfish boil On May 12th I will have my Russian Imperial Stout, my SMaSH IPA and my Sugar T—s Amber Ale. Could be an excellent day!