It I was back to my hometown last week for a consulting job and then spent the weekend visiting family. Bakersfield and beer go well together….when I was growing up it was a case of Coors in the bottle for $5.25! My exposure to real beer didn’t happen until Uncle Sam stationed me in Kaiserslautern Germany. Real beer – they told us when we arrived in country to respect the German beer and not drink it like your Coors back home. Did I listen? No! Did I learn? Kinda!

I blame the way the Germans count for some of my learnings. I learned a few key phrases in German like – “Ein bier bitte.” – one beer please. I would ask as well as hold up one finger, most of the time they brought two beers. I knew I said it correctly but I received 2 beers consistently….Why?

In Germany and for that matter many other countries around the world the index finger represents 2 – the thumb is the digit that represents the number 1. So, even if my language skills were decent – from a distance in an environment with some background noise, visual cues are stronger! They see the index finger and hear or see me mouth the word bier and two cold ones arrive. Oh darn, I guess I will just have to drink them and practice my enunciation better…wrong…language includes visual cues that cannot be discounted.

Oh yes – back to Bakersfield – nice home town brewery – Lengthwise out in the Southwest and now off of Rosedale at 2900 Calloway. Great beers brewed by the lads and also a nice selection of craft beers from others….food – well it is OK, the beer is the highlight. Triple Hop Red Ale and Centennial Ale were my choices. The Red Ale is listed as their best seller and for good reason! Check them out online or in person

Went off to visit my Mom over in Los Osos….she had a honey-do list for me and we spent a nice couple of days enjoying the central coast weather! I am a fan of Firestone Walker Brewery in Paso Robles and while grocery shopping for mom I spotted a new, to me, offering called the 805! It doesn’t get much more local than 805 area code…..which was also Bakersfield’s area code before it outgrew its britches and changed to 661. Paso, San Luis, Santa Maria. Pismo, Avila …… etc., knows that 805 is the local home. It is an interesting beer. I like the Double Barrel better but 805 is very drinkable. I left a few in Mom’s fridge…they are safe with her and should still be there on my next trip….unles my brother-in-law, Bill snags a few! I had to laugh a little at dinner on Saturday night…I ordered a Fat Tire and the owner poured it into the glass….he poured a nice head on the beer and apologized….I smiled and told him that I liked the head on the beer…he did just fine. My only complaint…they needed some local offerings! Celia’s Garden Cafe – they do dinner now… 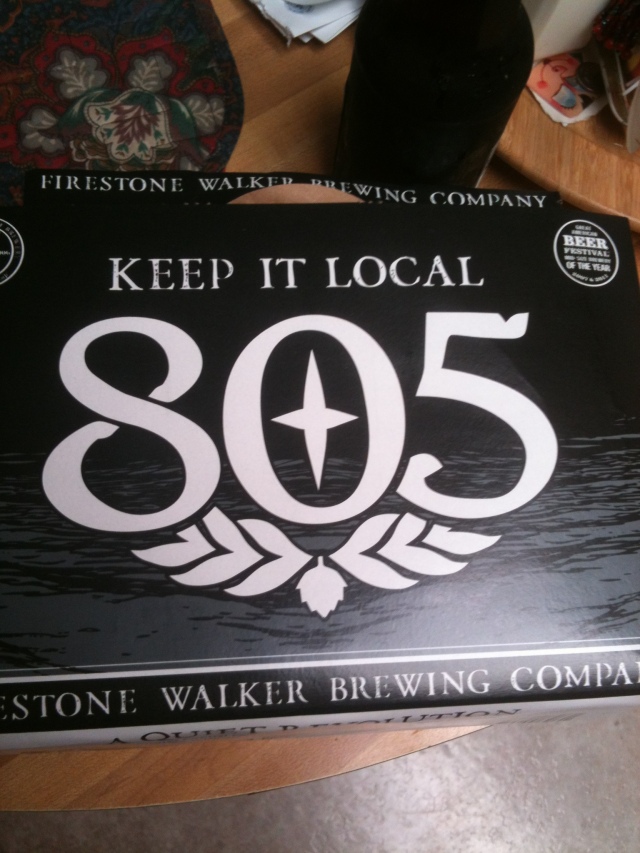