Family friends, the Ciliskes, invited a handful of their friends and family out to their ranch near Menard, TX this past weekend to hunt dove. Although we were not out there on the opening weekend of the Central Zone dove opener we had an undisturbed population of dove. All told we harvested about 100 dove, had a great time, drank a few beers – never with loaded weapons in hand – and ate like kings.

Dove hunts are a family tradition that I grew up with. Great memories of Grandpa Decker and his old Browning A-5, uncles, my dad and brother. As I moved on more time was spent hunting with my buddies, Mike, Steve and Nate. It goes full circle and I truly enjoyed hunting again with my dad in the years just before his passed away in 2001. I hunted with my boys in Midland building some great memories and now they are in that hunt with buddies stage of their lives. It will come full circle!

I really enjoyed the last evening hunt on the Ciliske’s ranch. My son Ben, his girlfriend Cheryl and I hunted the north end. It brought back memories of conversations during  hunts with my father years ago. Same words, similar context and further cementing a relationship with my son. A relationship that evolves, but never loses the key element of family love. Wipe eyes and move on!

One evening, after we had filled the larder with dove, I offered to make some Dove & Jalapeno Poppers for the crew. I deboned about 30 dove breast and wrapped them together with sliced Jalapenos, bacon, some cream cheese and salt & pepper. Skewered with a toothpick to keep them together and grilled until the bacon was crisp. I must say – they were a hit.

Upon return to Houston I decided to repeat the appetizer again. I made a slight modification. Rather than use sliced Jalapenos I used whole pickled Jalapenos cut in half lengthwise. The cavity after removing the seeds was slathered with cream cheese and rolled together with bacon strips.  The halved Jalapenos added a little bit more heat and flavor over the sliced method. Paired with a Sam Adams Latitude 48 IPA and the world was mine. 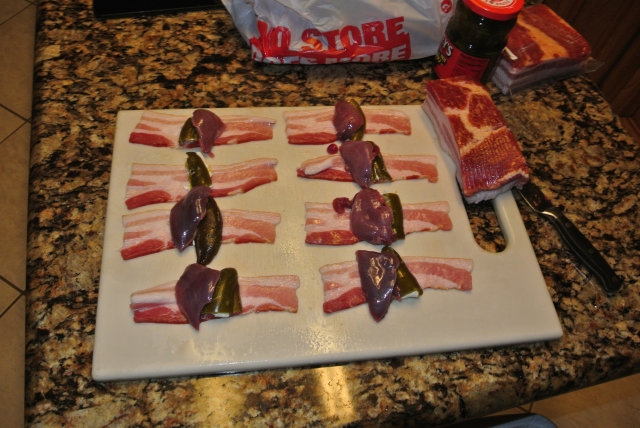 Wrapped and ready to go on the grill

On the grill with Veggie Kabobs in an attempt to be healthy!

The process went quicker than the ranch poppers as my son Ben stepped up and prepped the Jalapenos.

Great flavor – need to do it again!