My wife did make me walk through the store, just a wee bit, other than that I spent my time sampling beers in the Brewer. For those of you that don’t know, Whole Foods brews something new every time, no repeats. If you really like a beer on tap, reserve your seat, camp out, call in sick, do whatever you must because once once finished it will not be available – ever!

Those in red are their brews, in black are the guest beers.

Now the dilemma! I went with a 4 beer sampler and Kathy had a pint of the St. Arnold’s Christmas Ale.  Perfect in all ways for her!

Me, I did a sampler composed of the Simcoe Rye IPA ….. Wow, very nice! The second choice was the DL Wet Hop Double IPA…. I handed the keys to Kathy after that one. Then I went lightweight and had the “AnotherSESH” a session IPA that was very pleasant. Lastly, the Baltic Porter. The gal behind the bar also poured a pint of the porter by mistake for another customer and rather than toss it out, offered it to me at no cost. After much thought and debate, internal debate, I gave in and accepted!

Lastly,  a pint the Post Oak Pale Ale. My hat is off to Dave Ohmer, Head Brewer – he makes great beers!!!!!!

I helped Kathy navigate the Houston freeways home and only messed up once with my navigation. She has forgiven me!

I have been accumulating many ideas, brewery tastings and other “thoughts” since my last post. I promise to be more regular- not a Metamucil thing, but to pound the keys one finger at a time and share my humble beer adventures.

Today I am sampling a new beer for me! I am pretty impressed. Angel City IPA. Good up front bitterness but a little low on my love of the late addition hops for aroma. I drank two to make sure! LAX at Corona across from gate 86 – waiting to fly off to San Francisco.

I also promise to post tastings if 4 or 5 recent breweries – Whole Foods in Houston on Post Oak will be a special post- I promised Dave Ohmer that I would. Great head brewer and he is very creative. The Belgian with smoked pears, smoked right there in the store, was superb. 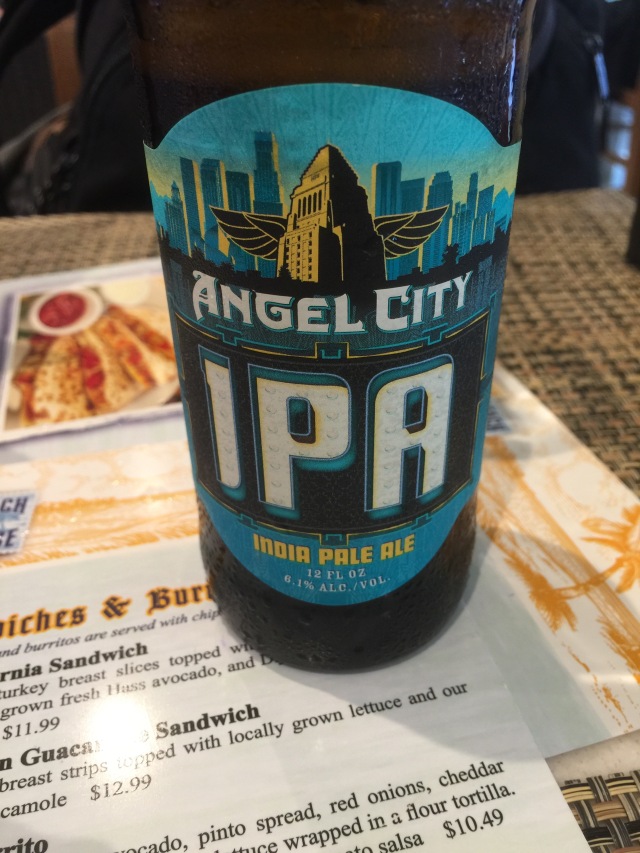 The City of Angels has “done good”!