Saturday September 3rd found daughter Lisa and I at a new brewery in downtown Houston, “Under the Radar”. The day started with a play at the Alley Theater in Houston, “A Night With Janis Joplin”.  Great play and the lead in the play, Kacee Clanton, was channeling Janis Joplin’s spirit…….from nearby Port Arthur, TX. We attended the 2:30 afternoon performance so we were free to explore downtown. What better form of exploration than to find a new brewery and partake.

My good friend and fellow homebrewer, Mike and his lovely wife Annette had texted me last weekend from the Grand Opening of “Under the Radar Brewery”! Lisa and I were a week late for the Grand Opening but, as the old cliché goes, better late than never.  We arrived in time to witness the end of the Texas A&M Aggies take an OT win over my old school, UCLA. While catching the two point conversion by UCLA I struck up a conversation with a young lady, named Kelli, intently watching the game. She is an Aggie, “Poli Sci” major and yes of course, an attorney. Better yet, she is married to one of the owners. More about that connection later.

We found a close and convenient parking spot at 1506 Truxillo Street (home of the brewery and beer garden), adjacent to the Deutscher Fleschwagen food vendor! Oh my…..translation is the “German Meat wagon/truck.” The smells were heavenly and I will have to report out on another visit about the food. Lisa and I were focused on the beers for this visit. 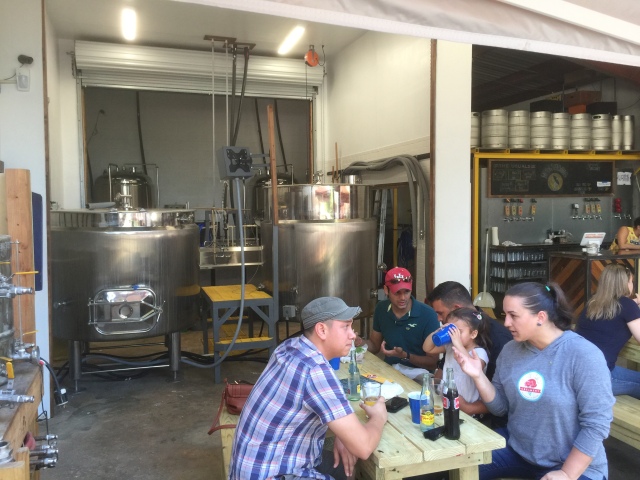 A look from the beer garden with the brewhouse in the background.

Dirty Blonde – I ordered the Blonde, I know, those of you that know me, are probably shaking your head because I tend to be an IPA fan, the hoppier the better. Lisa is a bit like me and she wanted the IPA….I  knew I would get a sip. I liked the Blonde and I know my wife will enjoy it.

Mid  Frequency IPA – Lisa…..yes she got the IPA. A good solid IPA, not over the top with bitterness. A good very drinkable IPA.

Midtown Bock – Because of commitments we decided to hold onto a token and sample the Bock and Porter on another visit.

Radar Love – a light Hefeweizen. Now, I don’t normally drink Hefeweizens, but on this warm late afternoon I ordered  and glad I did. Very nice beer and very refreshing….coulda had another……. Just enough Magnum hops to keep it interesting but not enough to have my wife turn her nose up at it….So, Kathy my dear, there are two beers on this list that you will love. 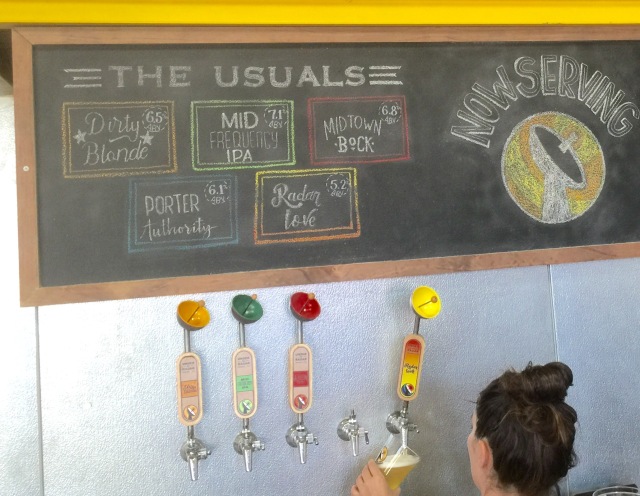 A listing of the usual offerings

There are plenty of tables to share with other likeminded beer drinkers with a nice mix of sun and shade in the beer garden. There is a Dynamo cornhole set on site to keep teams and groups talking smack and destroying their opponents. I noticed a few folks carrying in food and snacks as well as folks making use of the Deutscher Fleischwagen. 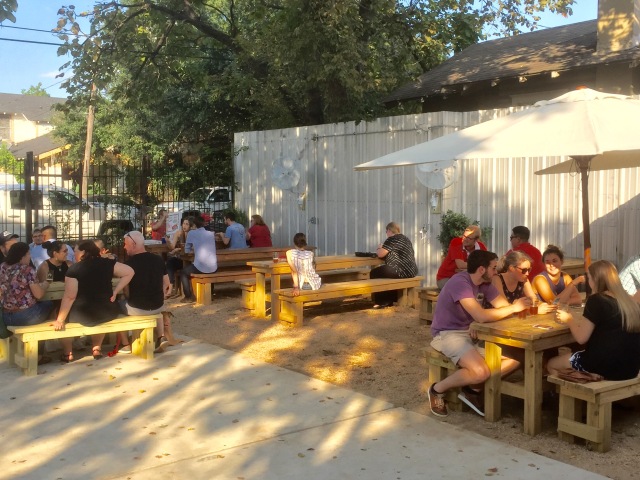 Back to Kelli now. She introduced Lisa and I to her husband, Mike Norfleet, one of the three owners and still dabbling in his civil engineering work….He is a Purdue grad, but, he brews some very good beers so I will cut him some slack and …….  he did have the good sense to marry an Aggie! We chatted about beer, duh, as well as bees & honey. I think I put a bug in his ear to create a Honey Blonde or something similar somewhere down the road. I don’t have the inventory to supply enough for a 10 barrel batch…..It would be cool to find a local downtown source!  I told Kelli and Mike that I would see if I can find a contact for them.

We waited around long enough to catch a brewery tour conducted by Mike. He definitely has a passion for the craft and delivers with a strong authoritative voice. He also asked me to behave and not answer any of his questions…..I complied. The brewhouse is a 10 barrel system and they utilize 3 fermenters that also double up as brite tanks for force carbonating prior to kegging. They don’t have a bottling line so everything is kegged and distributed locally. 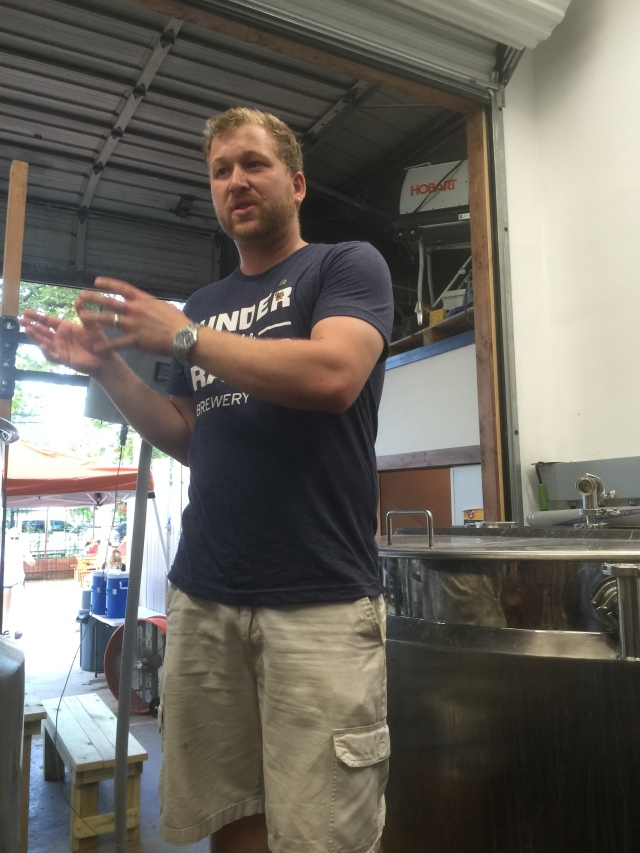 Mike Norfleet, one of the owners up on his podium…..walkway between the mash tun and brew pot….delivering the beginning of an excellent tour of the brewery. 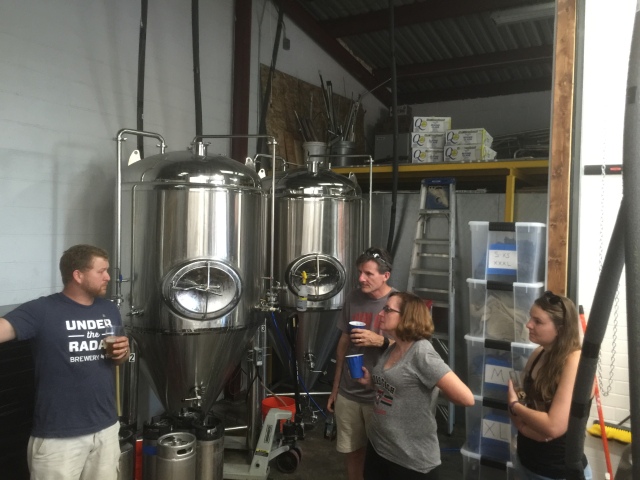 Mike again…..drinking a cold one and leading the tour.

I am anxious for another excuse to wander downtown and sample the remaining two beers. It won’t be long. FYI, Mike and Kelli like Hay Merchant and I do believe you can find an Under the Radar offering there.

PS, Kelli, if we can keep it a secret, I will bring a 22 oz. bomber of my 3 year old Russian Imperial Stout, 11% ABV and aged on toasted, bourbon soaked oak.