Part 2 of 3 is being finished up Sunday morning, very early ,still dark, at the local Starbucks. As is my morning ritual, I ride my bicycle down to Starbuck, enjoying the mostly “quietness in the air” at this time of day. This morning was “lovely”….. the cold front had passed through yesterday and it is 64 degrees Fahrenheit! Don’t laugh, in Texas that is indeed a cold front! I enjoyed it. I didn’t start sweating as soon as I lifted my leg to climb on the bike. In fact I may not even approach a sweat even on the ride home….just a little over a mile each way.

So, after a long day in the training class that I delivered on Thursday, I was ready to chill out and see what my research on the local brewing scene would produce. I visited with a few of the attendees and they gave high marks to Carters and Angry Hanks, both of which were on my list and both easy walks from the hotel. Two of the young engineers in the class, Cris and Cody, were heading off to Carters later that evening and I told them that I may see them  there.

The walk down to Hanks on North First Street was interesting. The walk took me by the local Greyhound Bus Depot. Now that is a different slice of life hanging out in the alley behind the building. It brough back memories of Bakersfield, California’s Greyhound depot. When the three black and white channels on the tv set were not worth watching, mom would load us up into the station wagon and we would go down to the depot and – she called it. do a little people watching! She would have loved the ring side seat here in Billings.

I arrived at Angry Hanks, a converted service station with a fenced in patio section. The folks that I followed in were bringing “take-out” food in. It seems that is the norm here at Hanks. Get off work, grab a few boxes of hot-wings or whatever your fancy is and enjoy a couple of cold ones. Hanks is a tap-room and not a pub or restaurant. Which means they can only be open from 4 PM to – well last beer poured by 8 PM and everyone out before 9 PM. Limit is 3 pints per person. Three pints of good craft beer is plenty – they range from 5% ABV to 8 or 9%  for some of the stouts.

Unfortunately I did not haul my Nikon along to Hanks so you will have to view the iPhone perspective. Note the Growlers along the back wall – left. You can fill your Growler but it is sealed…consumed elsewhere.

This is comfortable and incredibly laid back place. I sampled just two pints, just because! I had the double IPA. It was officially called the Head Trauma India Pale Ale. I am a fan of IPA’s and this one did not disappoint me. Very nice aroma and taste.  Next in my hand was a pint of Street Fighter Imperial Red Ale. Mr. Tim Mohr, owner and brewer, knows how to brew. This indeed a microbrewery – from what I understand, 90% of the beer brewed here is consumed on site…I suppose the other 10% goes out in the growlers.

While doing my research I ran across a site where customers can leave their opinions, ratings and thoughts. Lots of 3 out of 3 ratings. There was one that I will mention that gave it a zero and called it “skanky” – My opinion on his label….he probably did not belong in Angry Hanks in the first place, probably sported a manicure, wore something from Ralph Lauren – clothes and the smelly stuff too. He should have sampled his beers over at Walkers Grill – linens, waiters, menus and someone to kiss his behind!

My description of Hanks and the crowd……I am smiling just thinking about it. Lots of locals, European tourists (3), fly fishermen and women, river rafters, bikers, a young lady in a 50’s dress, fish net stockings platform heels and a wonderful smile. There was purple hair, red hair – like crayon red, piercings, tattoos, leather and a young family with three bright-eyed kids sitting up on the tall stools. I liked the place and I liked the beer. Mr. Mohr has a creative touch. I wish Texas would get around to voting on the law changes that would allow craft brewers this type of outlet…..time will tell! 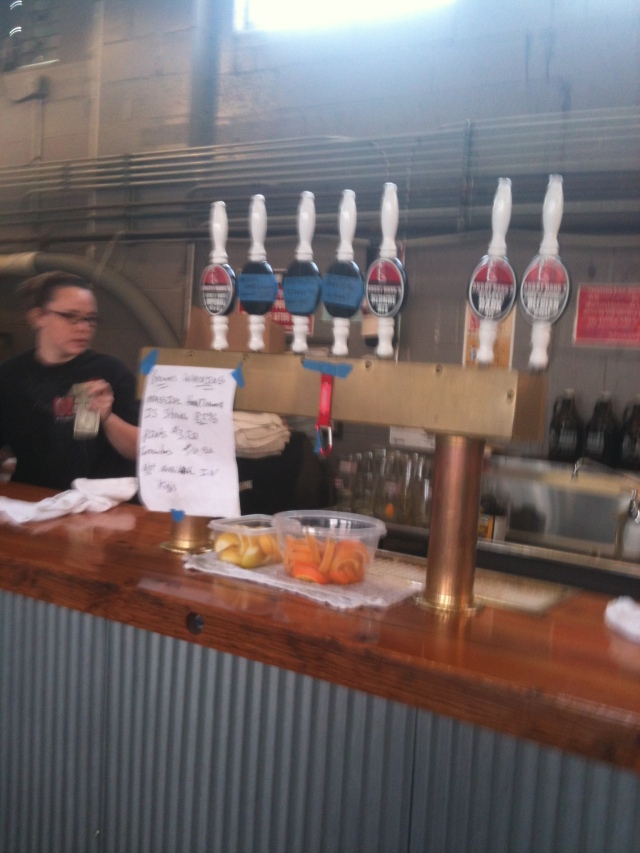 The line-up and ya gotta love it – blue painters tape with hand written descriptions! Again – sorry for the iPhone lack of picture quality – Hun, I think I need a new one!