I am making my first all-grain version of my Golden Wheat Red IPA. The first two batches were partial grain recipes. The first one was good, the second one was awesome! As I am typically prone to do, I will tweak the recipe, take pretty good notes, and plan the next round to be even better.

Brewing aids for the day;
One small 12 ounce glass, a couple of pours from the last of my session ale, at least one pour from my mellowing Belgium Wit….it was a little overwhelming with the bitter orange peel! So I then added a few too many drops of orange oil to the last 6L tap-a-draft keg…- 6 weeks later I do like it a lot! It has mellooooooooowed!

Brew notes;
It is looking good. It has a nice aroma and the dry hopping that will happen in a week or so should make it awesome!

Now the Paul Harvey portion- “The Rest of The Story”.

Everything ws looking good, the aromas and color of the wort was dead on! I cooled it to 78 deg F and grabbed a sample to check the original gravity. Oh s**t, the hydrometer floated so high that the fat portion of the bulb was above the top of the cylinder. What the Hell! It can’t be that dense! Grabbed another sample, I hate to waste anything and crap, same situation. I added about a gallon of water and bring the batch up to about 5 3/4 gallons. No perceptible change! Now what?

I dumped the sample and then and only then do I notice that the bottom tip end of the hydrometer is busted off. Now I know the problem. The hydrometer is missing weight and damaged. What’s a brewer to do?

I pitched the yeast, scrubbed pots, cleaned the mash tun and crossed my fingers. The batch is now sitting at a controlled 65 deg F in my chest freezer. The fermentation is underway. When I checked this afternoon the aroma is heavenly, bubbling nicely and maybe, Just maybe I will have something close to the planned outcome.

I drank a partial bottle of my Russian Imperial Stout today after witnessing a normal appearing kickoff to the fermentation. Warmed my belly nicely and right now as I peck away at my iPhone keyboard I am drinking the very last glass of my session Ale. 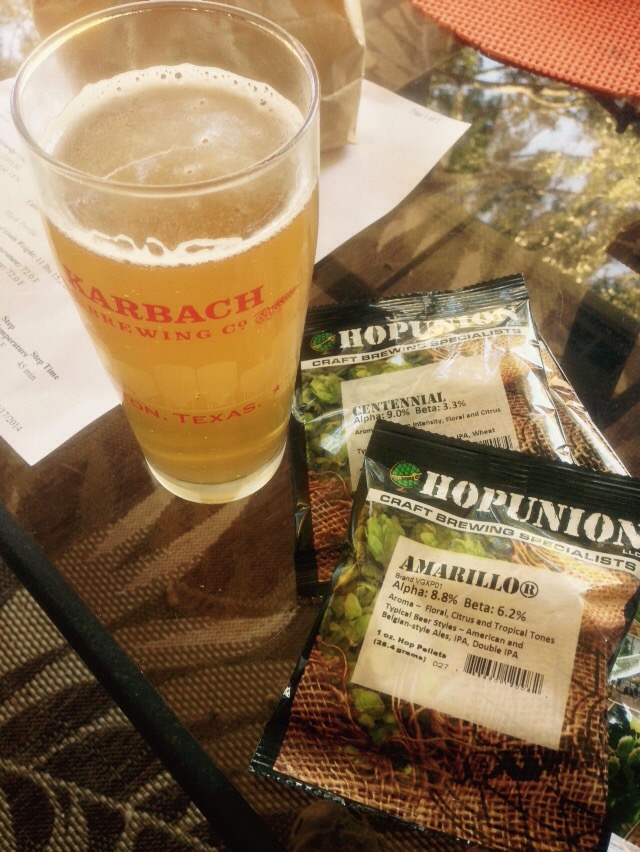 Session Ale and the start of the brew before I knew what the future portends.

At coffee this morning @ #Javaman I took this photo with my iPhone, I should be carrying one my good cameras all the time!!!!!!!!! “Dang me, dang me, they oughta take a rope and hang me” Roger Miller inspiration. The sky color matches my intentions with this brew. Hopefully a good omen!

PS: my bride and I will be pouring at “Big Brew Houston” Friday night the 24th of October. Come see us at the George R Brown Convention Center.